Trying to improve the next generation 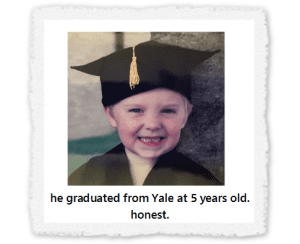 Last week something happened. Having played Fayetteville Parks and Rec soccer for seven years, a minor miracle occurred. My youngest son, for the first time in his life, scored a goal. We cheered like lunatics. A top-shelf bullet from 20 yards. And then, ten minutes later, another goal! The keeper couldn’t even touch it. Every time I see someone a little dialogue enters my brain: “Have I told them about Joseph’s soccer prowess?” Who cares! Tell them again anyway!

Yes, I was proud. But mostly I was happy for him. The look on his face is something I will treasure forever. It made me happy to see him happy. Fulfilling my ego through my children’s accomplishments is odd to me. He scored the goal, I didn’t. My ego should find its place through my own efforts and successes, not someone else’s.

I do not live through my kids. I have my own life. I love them, support them and haul them all over NWA, but in my opinion, the best thing for them is to see me living a rich, abundant life of my own. Because, someday, they will need to sculpt their own lives. I hope to be an example to them as I pursue my own created uniqueness instead of putting my life in orbit around theirs.

I give my kids the benefit of the doubt, gradually loosening my grip as they grow older. Yes, they may make mistakes or get hurt, but I trust them to learn and grow. Each year I trust them more and more to try new things and use their own judgment as they learn to navigate this world. My most important work as their parent was completed years ago.

I’ve often said that there are two qualities I want my children to possess: 1) happiness and 2) kindness. I know there will be unhappy times, but I want them to face the world with courage, confidence and a big, goofy smile. And, no matter what they accomplish in their lives, I want them to be kind to the people around them; strangers, subordinates, employers, neighbors and elderly church friends. Even if they are not wealthy professionals or esteemed civic leaders, I will be delighted to know that they have a sparkle in their eyes for the life they have been given and that they are gentle and respectful to everyone they encounter.

My own father never told me he loved me. He was abusive to me, my mother and my sister. He would do nice things like lead my Cub Scout den, but then embarrass me in front of my friends when my car crashed during the pinewood derby. And as I learned to love him later in life, I discovered he did his best despite his own demons. And even though I have plenty of my own faults, my father left me an unintended legacy: I tell my boys I love them. Every day. As a matter of fact, I tell them “I love you always, no matter what.” I hope they believe that. It is the best I can do, which is what God has done for me. The launching pad for an extraordinary life. Demonstrated in Christ and, hopefully, demonstrated by me.

After the game we got into the mini-van and we talked about the game. I asked him about his goals and what it was like to be dog-piled by his teammates. And then I said, “You know, I would still love you and be proud of you even without those goals.” However, the moment was passed. He already had his earbuds in. Oh well. I think he knows that anyway.