A Gentle and Quiet Whisper 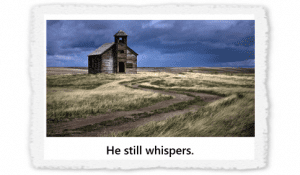 Did you know that half of the churches in America average 75 weekly attendees or less? And did you know that churches tend to plateau at 125 attendees and those congregations tend to lose the evangelistic focus they once had, and instead adopt a “club mentality.” “You have just enough people not to be missional anymore,” explains David Anderson, president of the Bridgeleader Network. “You don’t have to grow anymore to sustain your budget.” All this to say larger churches are growing while smaller churches are declining.

At the point of his greatest despair, God led Elijah to Mount Horeb. And then God asked Elijah, “What are you doing here?” Elijah responded “The people of Israel have abandoned your covenant, destroyed the places of worship, and murdered your prophets. I’m the only one left, and now they’re trying to kill me.” So God said, “go stand on the mountain and I will pass by.” Here is what happened:

At this point, Elijah’s future unfolded before him (in ways he did not expect) and he got back to work.

We tend to look for the next big thing. In a consumer culture, products, services and gimmicks are loudly pitched to solve our problems and improve our lives. And we do the same thing in our churches. “If this church-growth plan worked for them, it will certainly work for us!” And the hurricanes and earthquakes and fires pass brilliantly before our eyes. But are the loudest and most earth-shaking words the ones God wants us to hear? These days if the proverbial box from denominational headquarters won’t solve our problems, why would borrowing someone else’s flashy vision?

The network of churches we are part of has begun a new project. It is called “Dawnings.” Instead of offering step-by-step plans to guarantee an increase in membership, attendance or financial commitment, Dawnings asks congregations to gather together in prayer and discernment – to hear the whisper. The process begins with a retreat that includes a small leadership team from each church. All the participants discern together, pray together and dream together. Following the retreat, churches are invited to engage in the process as a congregation, focusing on the three central aspects of Dawnings: vision, formation and engagement. And this is all done organically and contextually. No easy answers. No prescriptive solutions. No “do-first-bless-later” approach. Just gathering together to listen to God.

My church is hosting a Dawnings retreat in September. If you would like to participate, let me know. Perhaps God has something to whisper to your church.