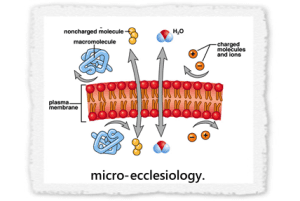 Since Jamestown and Plymouth Colony, our country has relied on a religious foundation. And for many years Christianity was not only the majority religion of our nation but, for all practical purposes, the state religion as well. Many yearn for a return to the days of Christian prayers in publicly-funded settings and the nostalgic comfort of the assumption that every American was a Christian.

But those days are over. And as we move out of the Christian culture that was common in America for so long we have an opportunity to recapture some beautiful features of our faith. Recently, one of the magazines I subscribe to listed the best sellers from the twelve largest Christian publishing houses. Of the dozens of books listed none of them were written about church life. It is as though everyone assumes that we know how to relate to one another as Christians and church members. But assumptions like this, especially as we come out of a time when Christianity itself was assumed, can be especially egregious.

Let me put it this way: the New Testament, the basis for our faith and practice, includes 22 documents written to instruct believers in Christ how to be churches. Mostly epistles, these are generally two-part documents. Part one describes ‘who you are as a believer in Christ’ and part two says ‘because you are in Christ this is how you should relate to one another.’ I estimate that over 40% of the content of these documents are telling us how to be in relationship with other church members.

So if so much of our Biblical witness is devoted to creating the relational environment that church members should share, why is no one talking about it? I am certainly no expert in biology but I remember a few things from 8th grade science class. I learned that the wall of a cell is permeable. Somethings, like oxygen and water, can enter a cell while other things, like waste, can leave it. Similarly, just as Christianity spread out of churches into our American culture for hundreds of years, some things from our culture seeped into our churches.

We lost our distinctiveness. Even as churches spread Christianity throughout the land, Churches became places that absorbed many things from the culture that surrounds us. Instead of being unique gatherings of people who demonstrated life-changing love, forgiveness and encouragement, we became people who behaved like everyone else. I spoke with a friend recently whose daughter died. She said “For two years no one at my church knew I had lost my child.” This is as sad as it is stunning. We let the isolation, conflict and social politeness of everyday “Christian” America permeate the sacred boundaries of our churches. While scripture calls churches to be extraordinary places of intimacy and growth, most churches and Christian groups have exchanged these opportunities for other, less potent experiences.

In the apostle Paul’s letter to a new church in Corinth, he describes a visitor who experiences the interaction among the church members. It is the encouragement, comfort and thankfulness shared among those church members – not lectures and lasers – that compels the guest to exclaim “God is really among you!” New trends seem to encourage a passive church experience while tradition assumes that ‘we’re all good Christian people.’ But when we intentionally follow scripture’s instruction to become communities of uncommon and desperately-needed love and authenticity, lives are forever changed.