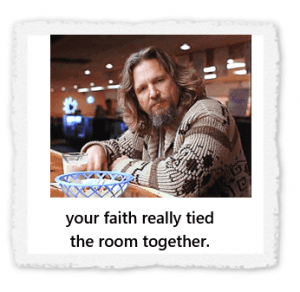 I have a friend who is a Dudeist minister. Dudeism, or The Church of the Latter-Day Dude, is a religion inspired by the Coen brother’s film The Big Lebowski. There is even a religion called Jediism, “based on the real life issues and philosophies that are at the source of the Star Wars myth.” And don’t get me started on Pastafarianism.

But despite all the weird religions out there, Christianity has had its share of embarrassing moments. Galileo was placed under house arrest by Christian leaders for insisting that the earth moved around the sun. The Crusades and the Inquisition sanctioned horrible violence in the name of Christ. And even after the Protestant Reformation murderous practices continued against those accused of witchcraft and even drowning other protestants for re-baptizing adults.

More recently, we might roll our eyes at a time when buying life insurance was called unfaithful. Or the days when not using a 400-year old translation of ancient Biblical texts was considered heretical. Or the faith healers begging their followers for money to buy corporate jets with gold-plated bathroom fixtures. Not to mention how we might even laugh at all the prophecies predicting the second coming of Christ that have come and gone.

When these events happened, however, people were not laughing or rolling their eyes. Many of these events seemed reasonable at the time, despite they way the look to us in hindsight. So we must be careful. There is always the risk that we could adopt beliefs and practices that future generations will look back on with laughter, or even shame.

For example, what will future generations of Christians think about all the denominations and churches that condoned slavery and racism in our country? Or Christians preaching exclusion or discrimination at the expense of grace and compassion? Or churches devoted to homogeneity while the rest of our culture embraces diversity?

Maybe the Christians of tomorrow will shake their heads at the way we are more committed to nostalgia and the good ol’ days than we are committed to a risen Christ who is just as potent as he always was. Or will tomorrow’s Christians wonder how we could so easily merge American patriotism with the Kingdom of God?

Will next generation’s Christians be amazed at our materialism? Or our church politics and power plays? Or church membership that is designed for passivity? What else have we quietly embraced that is contrary to a gospel of justice, compassion and holiness?

Jesus told his disciples to “go and make disciples of all nations” which we must do. But as we go into the world sharing Christ, we must be careful what we bring back with us. Because Jesus Christ is supreme, his kingdom is all-encompassing and his grace is sufficient – strapped-on beliefs and practices are nothing more than a distraction. And, besides, the Dudeists and Jedis need to know we aren’t completely weird.