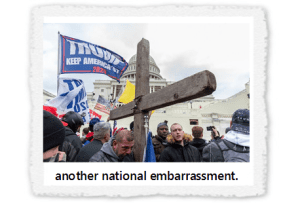 They carried crosses. They carried flags and banners with Christian symbols. Clothing was adorned with symbols and slogans about Jesus. Am I describing medieval crusades?

Christian nationalism was on display at last week’s terrorist attack on the seat of our democracy. What is Christian nationalism? Amanda Tyler, executive director of the Baptist Joint Committee for Religious Liberty, defines it as “a dangerous ideology that permeates our society and demands a privileged place for Christianity and its adherents.” Any American and any follower of Jesus Christ should have been embarrassed by what unfolded on January 6th.

Jesus Christ was not one of our founding fathers. And the problem with the assumption that America and Christianity are somehow synonymous is how it diminishes both. Our country has always been a place of plurality. And the Kingdom of Heaven was never meant to fit inside any human-made institution. It won’t fit. We might as well try and stuff a galaxy into Betsy Ross’s thimble.

But a deeper issue is at play. A spiritual issue that is not isolated to the right-wing appropriation of Christian privilege. I am talking about the dangerous marriage of politics and faith. Churches across the liberal/conservative spectrum have joined in the political polarization that has recently divided our nation. Has political identity become more important than our identity in Christ? For example…

If others are more likely to notice your political ideology more than your love and devotion to Christ then you may have reduced Jesus to a mere character in your political narrative.

If your Christian faith is dependent upon ideology borrowed from Democratic or Republican platforms then your greatest allegiance is idolatrous.

If you are unable to see positive qualities of the “other” political party then your political allegiance may be more important to you than your spiritual allegiance.

If your church could be mistaken as some quasi- spiritual outpost of the Democratic or Republican parties you’ve lost your way . The kingdom of heaven will not acquiesce to the platform of your party or other political groups.

Since its beginning Christianity has been seditious. But the first Christians did not picket the Roman senate. For example, both slaves and their masters were considered equal in Christ (see Philemon, etc.). But instead of rallies, the first Christians avoided the dangers of political associations. Rather they demonstrated the changes Christ accomplished. They did not chain the gospel to an ideology created in a party headquarters. Minority lives mattered as they were accepted as brothers and sisters in Christ. They worked to make the empire great again by standing up for the vulnerable and dispossessed. They had better things to do than partisan sloganeering.

I love our country. But I love Jesus more. And I will work to see public policy reflect the fact that everyone in our city, state and nation are worth dying for. But there is no partisan ideology that can improve on the gospel and no candidate can ever replace Jesus Christ.