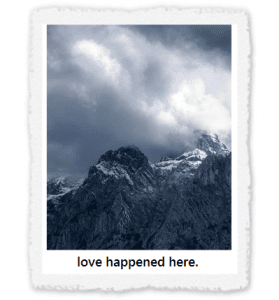 My mother remarried when I was thirteen years old. Jim was a kind and gracious man. He treated me and my sisters like we were his own. It was wonderful to see my mother so happy and no longer afraid.

He was a vice-president of an oil company. And instead of commercial flights to meetings around the country, he became a pilot and eventually owned an airplane. The company reimbursed his flying expenses at the cost of plane tickets.

That arrangement was great for me. Because for many years we had the most epic family vacations. We could leave from our little town and be anywhere in the country in just a few hours.

Soon after I got married, we took a trip to New Mexico. Jim, my mother, my bride and I piled into his single-engine Beechcraft to enjoy a vacation together in the mountains. However, as we flew west something happened.

We were being controlled by Denver ARTCC who gave us a heading through a clear passage between the mountains. But the passage was not clear. As we neared the pass a tidal wave of winter weather crashed on top of us. In his thirty years of flying Jim had never experienced such turbulence. We had to vigorously tighten our seatbelts to keep our heads from hitting the top of the cabin. My wife and mother tried to pray but it was hard to form coherent thoughts because of the nausea and disorientation from the white-out conditions. Sitting in the co-pilot seat, it was my job to manage the charts and maps which I could barely do. I mostly looked out the window and watched the pine trees zoom by and ice form on the wings.

How Jim managed to fly that plane is a mystery to me. His knuckles were literally white and sweat streamed down his face. Because of his size his head hit the ceiling and side of the cabin many times. He would command me to find a frequency or tune a transponder but I could not – he did all that himself, steering with one hand, as the plane shook violently. If you’ve ever had a moment when you accepted the imminent likelihood of your death you can understand what it was like.

But we landed safely in Santa Fe. No injuries. No damage to the airplane. After we unloaded and I slammed the door to the luggage compartment, two large slabs of ice fell off the front of each wing. We stood on the tarmac weeping and holding each other.

A few hours later it was a sunny afternoon in Santa Fe and we were strolling through art galleries, laughing and talking. But as we faced a large painting, Jim turned to my mother and said, “Robin, I have a big black spot in my left eye.” The next week was a lonely and frightening vigil at the ICU waiting room at UNM Hospital in Albuquerque.

Jim survived the stroke. But he never flew again. He was never the same, actually. He was weaker, more unstable and easily confused. The sheer, heroic effort he made to safely land that plane almost killed him. But he saved our lives. Jim will always be my hero. I live under his sacrificial love. Christ said, “Greater love has no one than this: to lay down one’s life for one’s friends.” I live under his sacrificial love as well.