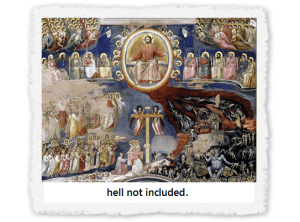 My worldview was formed by cartoons and comic books. When you don’t have smartphones and 500 television networks you do the best you can. My sources for popular media taught me a lot – including my understanding of the afterlife.

I watched Tom and Jerry, killed in every episode, either rise to the pearly gates or sink down into some fiery place. This scenario became part of popular culture as it was reproduced in countless television shows and movies.

I call it pitchfork theology. That some unlucky people who died in an act of violence or crime or chasing a mouse would end up in Hades to be tormented forever by little red dudes with pitchforks and pointed tails.

But this cosmology has not survived the test of time. I’ve come to doubt that God would allow a hidden corner of his restored kingdom, that glorious merging of heaven and earth, to be reserved for cackling demons to torture everyone who drank too much or did not go to the right church.

Yes, the Bible tells us about a place called Hades. But the Bible also tells us that Hades is destroyed. I believe in Hell – but as a place mostly of our own creation. And, believe me, God knows that a life, if not an eternity, lived without Him is punishment enough. But to add to the misery of rejecting our Creator by allowing some dude in red tights to stick bamboo shoots under our fingernails for thousands of years suggests a cruelty worse than the devil himself could muster. I cannot reconcile the theology of eternal torture with a God who would send Jesus to die for a selfish dork like me.

So what about eternal fire and punishment? What about the wailing and gnashing of teeth? I believe those things exist, but not like we’ve been shown in New Yorker comics.

Scripture tells us that God is a holy fire. That in light of God’s blazing rightness everything that doesn’t belong in God’s realm will be burned away. And that means more than mosquitos, wet carpet and out-of-control children on airplanes. It also includes us. When all of this is resolved, each of us will stand in that holy fire – and there will be no place to hide. Everything about us that doesn’t belong will be burned away as well.

C. S. Lewis says that “There are only two kinds of people in the end: those who say to God, ‘Thy will be done,’ and those to whom God says, ‘Thy will be done.’ I have no first-hand knowledge, but I wonder if that fiery place of teeth-gnashing isn’t the experience of those who are with God forever but don’t want to be there.

God has never trumped his own gift of self-determination. And while we tend to think that when we see God face-to-face in all his splendor we will change our tune, apparently how we react to God today is indicative to how we will react to God in his eternal tomorrow.

So give close attention to your relationship with God. There may not be pitchforks in your future, but he awaits – blazing, holy and with open arms.