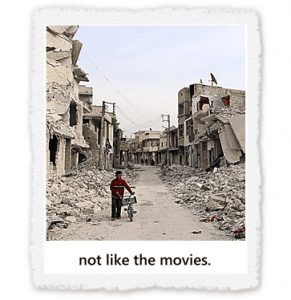 I hate that once the hounds of war are released they ravage relentlessly never wanting to stop.

I hate arms dealers that are greedy and heartless. And politicians who cave to their lobbyists.

I hate that countries and ethnic groups cannot work out their problems. I hate the pride, vengeance and one-upmanship that tramples peace on the way out of the halls of negotiation.

Yes, there is just war. Liberating Europe or Granada is one thing, but, like McNamara, what will history reveal about those wars that leave us confused and uncertain? Will we always fight despots for petroleum, but not fight despots who orchestrate massacres in places without the resources we need? There are complexities to these conflicts that I may never understand.

But there are things I do understand: I understand courage. I understand sacrifice. I understand grief. Next Saturday, October 9th, at 2:00 at the Veterans Memorial Garden (behind the Fayetteville Veterans Home at 1125 N. College) a group of Democrats, Republicans, Baptists, Catholics, Agnostics, Bikers and Boy Scouts will gather to honor fallen heroes. Prisoners of War (POWs) and soldiers Missing in Action (MIAs) will be remembered in a special ceremony. Family and friends will be seated in the front row, simultaneously bursting with pride and tears.

When war ravages bodies and lives and hearts, we step out of the cycle of anger and vengeance and help each other pick up the pieces. Putting aside our questions and confusion, we comfort, we salute and we weep for the fallen…and the missing.

Many of us are searching for heroes. War, despite itself, creates them. Maybe you will remember a fallen hero next Saturday at the Veterans Memorial Garden. And, maybe, you will leave that place more like a hero yourself.