Monkeyblood, a Bag of Diamonds and a Storm Cellar 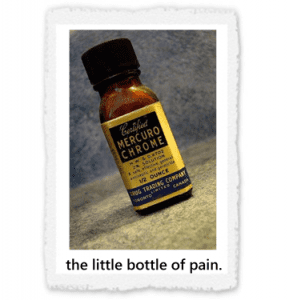 Bike wrecks. Falling out of trees. Hit in the face with a Frisbee, football or clod of dirt. My childhood was marked by a continual series of minor injuries. I was constantly running into the house howling and sniffling. My poor mother would drop what she was doing, give me a hug and get to work. It was a ritual I became accustomed to but, evidently, did not try very hard to avoid. She would set me next to the sink in the bathroom and wipe my scrape, cut or puncture with a warm washcloth. That was tolerable. But then things got serious. We called it monkeyblood. That little bottle of Mecurechrome. The little brown bottle of pain. If a mercury-based antiseptic is poisonous enough to get banned by the FDA, certainly it’s strong enough to kill a few germs, right? My mother would brush the monkeyblood on my skinned knee or elbow, blowing on it like crazy, while I cried like a baby.

It is a small spot of ink. The spot of ink needed to make an asterisk. Specifically, the asterisk on the word love.* The small symbol that reminds us that loving someone isn’t always happiness and laughter.

It is that photo album on a high shelf. It is full of pictures, many of which you have forgotten. The pages have yellowed and the tape has dried out. You haven’t gotten it down in ages, but it seems to call you. It is an entire volume of memories. Images you had forgotten. Images that tug at your soul. Images that make you laugh out loud. Images that break your heart.

It is a bag of diamonds hidden within you. Diamonds that are only seen when they fall from your eyes as tears. They will last forever unless they reveal themselves streaming down your face. What good is a hidden bag of diamonds? They will endure forever, weighing you down, until they are offered to the world.

That is grief. It is Mecurochrome on a skinned knee– the pain before healing. It is an anchor of sadness seeking a place to be lowered. It is that photo album collecting dust on the top shelf yearning to be remembered. It is a bag of diamonds, remaining, heavy, until they fall as tears. It is the risk we take when we love someone.

There are many analogies for grief, but I have another: It is a storm cellar, covered by a weighty door. I don’t want to go in because it is a place of pain. But I know I must. I can delay it or avoid it altogether – at my own peril. So I open those heavy doors, squeaking on their rusty hinges, and step down into the musty shadows. I have entered the aching darkness. It is my place of private sorrow. I soon find myself on the floor, lost in the maelstrom. Then I remember… I’ve been here before. Eventually I look up. There he is. He is seated at a desk. He looks at me. He doesn’t say a word. He doesn’t say “Don’t be sad.” Neither does He offer to take the grief away. He is simply there, in the cellar, with me. And that is all that matters.