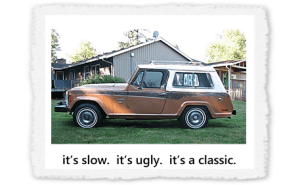 When I was in high school, my step-father, oddly enough, let me and my friend borrow his 1969 Jeepster Commando for a road trip. That’s right, two seventeen-year olds driving 500-miles to Colorado for a photography seminar.

It was an uneventful trip until we got to Independence Pass. The ol’ Jeepster could barely make it up the mountain. It chugged, spewed out smoke, stalled and clanked until finally we reached the top and managed to coast down the other side. And that was great. We easily rolled all the way down the mountain. Woohoo! This is great! It’s running fine! But when I rattled into a service station they quickly diagnosed my problem. I had neglected to check the oil and fried the rings on three of the four pistons. Uh-oh.

The other day I had a conversation with a friend about being a pastor. We talked about all thing things I was supposed to say and supposed to do. And I said, “So what about you? What are you supposed to say and do?”
“It’s different for you – you’re a pastor.”
Having had this conversation before I replied “So I have been given a more potent Spirit than you?”
“Well, no.”
“So my spiritual gifts are better than yours?”
“No.”
“So there are first-class and second-class Christians?”
“No.”

However, many have quietly adopted a class-based Christianity. And some laypeople have embraced being ‘second-class Christians.’ This means that they expect more from other Christians, such as clergy, while expecting less from themselves. Granted, to be a minister usually means the person has a certain level of spiritual maturity and experience, but creating categories of spirituality is asking for trouble.

Yet for many churchgoers, their ministers are the ‘designated Christians.’ A great deal is expected from the designated Christians including growing the church, evangelism, pastoral care, vision-casting, outreach, ministry incubation and creation, etc. I’ve even heard church folk say, “Pastor, that’s what we pay you for.”

Biblically, a church hiring a designated Christian is a problem. Each believer has been supernaturally gifted by God to do amazing things to reveal the risen Christ. No Christian is any more endowed with God’s Spirit than any other. Paul’s instruction to the Corinthians is a straight-forward explanation of this fact. Certain gifts, like preaching and leadership, will put some Christians in high-profile positions but that does not imply greater value or giftedness.

But if I can expect more of another believer, that means that I am, effectively, expecting less of myself. Which means I can only do minor things for God because there are others out there who can do major things for God. And doing minor things for God is easy – it doesn’t require my full devotion, my full humility or my full faith. (That is human nature talking, not a radically new nature talking.) In a class-based spirituality, some church folk can maintain their personal sovereignty instead of submitting to God’s sovereignty. This is a recipe for disaster.

In the centuries that America was a church culture, congregations could afford the luxury of a class-based spirituality. One spirit-empowered person could do most of the work. Like a heavy car rolling down the mountain with only one cylinder, it was easy to believe things were operating as they should. But those days are over. In today’s “uphill” religious climate, churches cannot afford to rely on designated Christians. Neither can any Christian afford to relinquish spiritual potency to others. Every believer should be encouraged to know that they have been gifted with a Spirit that can change the world. And all of the Spiritually-endowed people of a congregation, included clergy, should collaborate and work together, as equals – with all pistons firing.