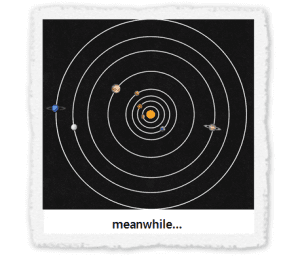 In the old book there is a story of a ribbon-cutting. Decades after the Babylonians destroyed Solomon’s temple, some of the exiles came back to rebuild it. You can imagine the excitement. The foundation was laid. Priests sparkled in their regalia. Trumpets blared and cymbals clashed. The people sang loudly with smiling faces.

Yet beneath the din of this celebration there was another sound: weeping. Was it tears of joy? Unfortunately not. A few of the oldtimers remembered the previous temple. Which, apparently, was slightly bigger. Even at this thrilling milestone, they wept because they remembered the way things used to be.

I am certain I am not the only one who has enjoyed the recent change of seasons. I can breathe in the cool air. My trail runs and workouts have improved dramatically. As we move out of our Summer of Discontent I’ve realized: our planet is still orbiting the sun, the stars are still shining and creation continues her ancient courses. Autumn comes as a relief.

The grumpy people who wept at the ribbon-cutting were looking backwards. They had more faith in nostalgia than they had faith in God. They associated God’s power with a certain point in time and a certain historical edifice. This reminds me of a current political platform.

But God is not stuck in yesterday. We know that while those people wept for the past, God had blueprints that were more glorious and hopeful than anyone at that ribbon-cutting could have ever imagined. Plans like Bethlehem, an empty tomb and a world filled with Spirit-powered people. God is forever capable of great ideas.

As our earth continues her orbits and the cool air caresses my brow I know this will not last forever. Did God bring this pandemic to correct us? I don’t know. But I do know that God — like the steadfast symphony of the seasons and the patient rotation of the galaxies – is still at work. We are not trapped in this moment. We are not constrained by the past. We are not stuck in racism and selfishness and maintaining white superiority. God is not done. A glorious future awaits. There are more amazing blueprints to unroll.