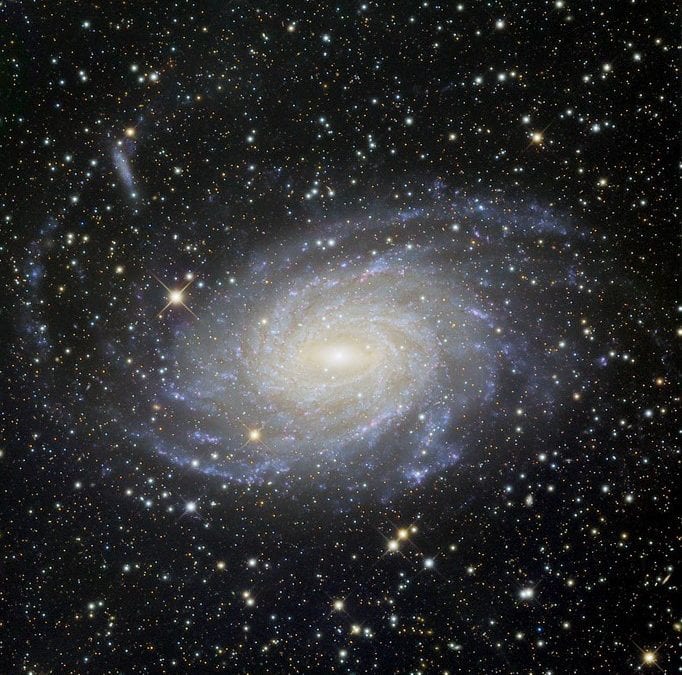 This galaxy pictured at right is not “our” home; but, in many ways it is very similar to our real home, the Milky Way galaxy. This image is of a beautiful spiral galaxy called NGC 6744.

Surprising to us, our own Milky Way galaxy is a relatively insignificant member of a small “Local Group” of galaxies which are, in turn, a very small part of the Virgo Supercluster of galaxies and they, in turn, are a part of the edge of an even still larger supercluster. Comparatively, our own star, the Sun, seems to be quite lost in an incomparable number of multiplied billions upon billions of stars. Yikes! That means that our solar system (where we are located) is just not at the center of anything!

It’s true. We seem to be a bit of an afterthought in this vast universe and yet we are still the only known beings in this universe who have tried for centuries and centuries to understand why and how it all exists!

In this pursuit of cosmic understanding, we are presently a part of an unusual generation that has designed and built huge elaborate ground-based optical telescopes and huge wide ranging electromagnetic radiation analysis disc systems. We have also utilized a significant part of our national space program to develop not only the Hubble space telescope but also very sophisticated satellite radiation probes. These devices have literally exploded our knowledge of the structure and cosmic history of the universe even back to the moment of its inception now known to us as the Big Bang!

We have also discovered that the galaxies making up our universe are not particularly friendly (including our own Milky Way galaxy)! The dangers to our life on earth are quite impressive! Torrents of lethal radiation reach past the 26,000 light years of our solar system’s orbital radius around our galaxy’s massive black hole! There are exposures of deadly radiation from explosions of aging stars, a plethora of gravitational interactions between billions of galaxies which are capable of extremely violent star collisions, distortion of galactic shapes, and shifting the orbital configurations of our solar system!

Is our spiral Milky Way home in imminent danger? It may surprise you to learn that astronomers, cosmologists, and astrophysicists (using all those physical resources listed above) have discovered an impressive number of physical parameters that are designed to offset those above cosmic dangers.

Is Someone providing cosmic protection for us every split second of our lives??

“For all God’s words are right, and everything he does is worthy of our trust. He loves whatever is just and good; the earth is filled with his tender love. He merely spoke and the heavens were formed and all the galaxies of stars.” Psalm 33:4-6. The Living Bible (Tyndale House Paraphrase)

In future blogs we will examine scientific evidences of how God protects our MWG home.