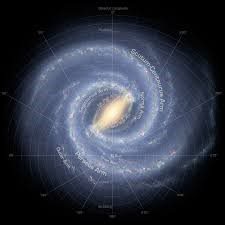 The photograph is a computer generated image of our Milky Way galaxy by mapping data obtained from a wide variety of electromagnetic waves originating from various sites on the Milky Way star complex in our night sky.

The image revealed a bar -shaped core made up of billions of older, cooler yellow stars with extended spiral arms made up of stellar dust, molecular gases, star clusters, and debris from exploded giant red stars (supernovas) interspersed with billions of hot bluish young stars. Our Sun and its planets with moons are located in between the spiral arms at the point where the perpendicular white lines cross the photo.

Notice the smooth evenly spaced symmetry of the two spiral arms and the accompanying feathery clouds of matter in between those spiral arms. Most other spiral galaxies do not exhibit such smooth symmetry. Typically, they have undergone major collisions and recombinations with other galaxies which result in severe rotational irregularities for any of their planets and deadly conditions for any possible support of life. Our Local Group’s sister galaxy, Andromeda, has undergone a major merger with another galaxy which has significantly altered its galactic structure. Our Milky Way galaxy has no evidence of ever having undergone any major collision event.

Astronomers have discovered that, as the Milky Way galaxy rotates, it carries our solar system very near a critical distance known as the Co-rotational Radius. This distance is about 26,000 light years from the central galactic core and within a ring like annulus known as the Galactic Habitable Zone. At that position, it is absolutely essential that BOTH our solar system’s rate of rotation around the core and rate of rotation of the spiral arms around the core ARE THE SAME!

It is very difficult for three race drivers to stay ABREAST of each other on a curve during an auto race even for a few moments! All three vehicle speeds have to be different! Yet, our Creator has kept for billions of years our solar system and nearby stars in the spiral arms on the galactic plane from straying from the Co-rotational Radius and keeping our solar system from crossing into the spiral arms where hazards of radiation, severe dust storms, and additional gravitational disturbances could destroy all life on earth.

Thus God Says: Are you telling me what I can or cannot do?

I made earth, and created man and woman to live on it.

I handcrafted the heavens and direct ALL the stars in their rotations.  Isaiah 45:11-12

THE MESSAGE: The Bible In Contemporary Language by Eugene H. Peterson

The above photograph was produced by NASA/Jet Propulsion Lab/CalTech/R. Hurt (SSC CalTech)