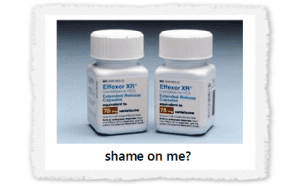 Though accurate numbers are hard to find, the Center for Disease Control reported in 2014 that 33,285,000 Americans reported using anti-depressants. Make that 33,285,001.

Some who know me may be surprised by this news. Local psychologist and Huffington Post contributor Margaret Rutherford describes “perfectly hidden depression” effecting high-achievers while those around them are oblivious to their condition. I kept soldiering on despite symptoms that felt overwhelming.

My mother, uncles and sisters used anti-depressants. Not me! I thought to myself. But I began to notice my efforts to be enthusiastic, confident and outgoing slowly erode. Why was I feeling a sense of dread? Where was my motivation? Why was my brain filled with fog? It didn’t make sense.

In hindsight, I realized that I have been fighting these issues since my twenties. I first assumed it was allergies and I spent years with shots, sprays and antihistamines. And then I thought poor sleep patterns were the culprit. But the symptoms continued to haunt me.

So I continued investigating – turning over every stone I could find: midlife issues, spiritual vitality, my marriage…and then I found the last stone: depression. My first reaction was relief. I had been ashamed of my symptoms for years believing I was broken, lazy and apathetic. That my own brain chemistry was working against me made perfect sense.

Depression is an emotional hallucination. And undiagnosed depression is cruelly frustrating. But I have already enjoyed the benefits of my medication. Yes, there are mild side effects, but the dread and sadness that has hovered over my life is now mostly contained.

You might think it odd that I have submitted this story to the newspaper. But I do not feel any more shame about depression than I would for any other ailment. And for those of you who see my neurotransmitters problems as an opportunity to say “If you had more faith you wouldn’t be depressed,” I have two comments for you: 1) be thankful that you do not suffer this affliction and 2) be assured that I have met plenty of people with serious mental health issues who are more gracious than you are.

Unfortunately however, many people, including Christians, have suffered from depression and other mental health problems in isolation. Some churches view these problems as faults of faith or character. But know that in most cases these problems have no place in the arenas of blame and condescension. Depression is not your fault. It is just one of the many imbalances that can be found in our very complex human bodies.

I am grateful that the stigma of depression and other mental health problems is finally being replaced by the same compassion given those with other diseases. I am grateful that God has gifted neurologists and pharmacologists to create such helpful medicine. And I am grateful that after decades of shame and struggle, I can peer through the fog and see God’s smile again.