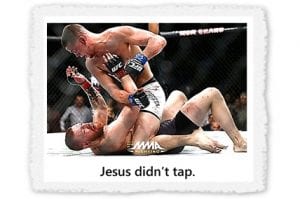 I watched a lot of television as a child. Though I saw no sexual content, I saw a lot of violence. Our culture will quickly shun public displays of nudity or the broadcast of profane language, but not blink an eye at a televised stabbing or a PG movie showing someone bludgeoned to death.

The first thing I noticed is that the parking lot was full. Obviously MMA is very popular in NW Arkansas. Seventeen fights were scheduled for the evening. What I saw was very similar to boxing, but with much smaller gloves. Competitors could kick and choke. You lose when you voluntary “tap out,” get knocked out or injured (snap) or pass out from being choked (nap). It is street-fighting with rules. Some spectators cheered for specific fighters, but most cheered for a hard hit or kick to the head.

After about six bouts, a fight erupted in the stands. I could hear punches landing from across the room. Dozens were fighting or trying to break up the brawl. Security eventually shoved the culprits out the door. I got the impression this wasn’t the first time this had happened.

This is when I decided to leave. Bar fights like this are notorious for sucker punches and cheap shots. However, those of us who chose to leave (including parents with school-age children!?!) were denied exit. Why? Evidently the brawl had moved into the parking lot. By the time I got to my truck, a second ambulance had arrived. The violence, the crowded room, the alcohol and the few narrow and mostly-blocked exits are a recipe for disaster, in my opinion. The Fire Marshall and the City of Fayetteville might approve of this set-up, but any public place needs better safety and security standards.

On the positive side, these young men are in great shape and have a controlled outlet for their aggression. On the negative side, the sport is violent and the violence spreads beyond the ring. MMA is another choice for our violence-hungry culture, and it is a participatory one.

So why do we crave violence? Why invest the time or money to watch a violent movie or fight? I am sure there are many reasons. I know we are drawn to vengeance. We are prone to hurt others, especially if we have been hurt. We carry anger and are briefly relieved when we can inflict it on someone. There is a cycle to violence. It grows until one day what has festered in us, fed on a diet of violent pursuits, is unleashed on a spouse, child, loved one or even a stranger. A gesture, a word, a fist…or worse.

As a pastor, I hear about the effects of violence (mostly against women and children). But I know those perpetrators never intended that course for their lives. Their regret is real. Yet violence controlled them and they ultimately harmed others and themselves. Violence can be an addiction.

But we are not condemned to a life of violence. Christ showed us an alternative. He showed us an entirely different power. A power that does not punish or humiliate or bruise. He showed us that true power comes from love. True courage comes forgiving those who hurt us. True freedom comes when we break the cycles of violence and revenge. I hope you will not choose a diet of violence. Our world has enough pain. And there is an alternative. He was the one who was whipped, beaten and crucified. He never fought back. But he never tapped out either. He is the Prince of Peace. And he is the toughest, strongest…and gentlest…of them all.