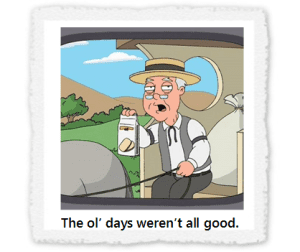 But those days are over. They are never coming back. Driven by accelerating technology and dynamic social trends the world is a much different place than it was when friendly old men with straw hats and suspenders talked wistfully about raisin bread.

We struggle with change. If not having our regular table at our men’s prayer breakfast this morning brought confusion imagine how we react to unhindered media, rock-and-roll churches, legal marijuana and changing sexual mores. Some of us might look at the world around us with fear and suspicion, as though God suddenly vanished.

Did it ever occur to you that some of these sources might be exploiting our fear of a changing world? “If it bleeds it leads” is not new. Having our longing for the good ol’ days reinforced by bad news can be self-affirming and addicting. But is that accurate?

For example, did you know that the hole in the ozone layer is the smallest it’s been since 1982 and that reforestation has made the world a greener place than it was 20 years ago?

Did you know that the black leopard and rhino populations are increasing and whales are being spotted in waters once considered too polluted?

Did you know that Costa Rica, Denmark, Australia, Scotland and even Texas have produced more renewable energy than they need?

Did you know that Algeria and Argentina are now malaria-free, HIV has been cured in multiple patients, Rwanda has almost eradicated cervical cancer and 88% of 1-year-olds around the world are receiving life-saving vaccinations?

Did you know that globally 63% of girls are completing primary school and women are receiving an average of 9.1 years of schooling just behind men’s 10.2 years?

Did you know that 85% of the global population has access to the electric grid, average life expectancy has surpassed 72 years and those living on less than $2/day has dropped from 34% to 10%?

I wonder if Pepperidge Farm remember racism, ethnic cleansing and the day the Ohio River caught on fire. The good ol’ days weren’t all good. And despite the news you select there are a lot of great things happening in the world right now. And for people who believe in “the good news” a steady diet of bad news just doesn’t make sense. But I still like those cookies.