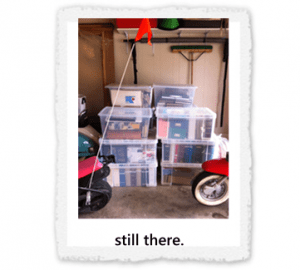 Yes, the Fourteen Bins remain in their place to this day.

These words resonated with me. As I have debated having a mid-life crisis, my wife laughs it off: “You can have a convertible, but not a girlfriend.” I wish it was that simple.

When my mother died my little sister got the cookbooks. My older sister got the genealogy files. I got everything else: scrapbooks, photos, keepsakes, diaries, yearbooks… My mother was the family curator.

So in my garage, stacked behind my fussy Lambretta motorscooter and my kids’ mini-bike, are the Fourteen Bins. Large plastic bins filled with my family’s history. I need to do something with them. They stand like a monument which I must ponder every time I park a car or grab the snow shovel.

But the Fourteen Bins are not a mere reminder of my procrastination (my mother died in 2011). The Fourteen Bins represent much more. The Fourteen Bins call me to action. Because they are filled with one-of-a-kind momentos of bearded ancestors, beautiful moments captured in Polaroids and heartfelt letters filled with love, longing and laughter. The lives and legacies of generations of family members reside in those boxes — and it is up to me to honor them. Or else they will be forgotten. Forever.

My step-father had a single-engine airplane. One spring he flew us to New Mexico to go skiing. Flight control in Denver sent us over a pass into a violent snowstorm. We did not have enough oxygen to climb over the storm, we had to go through it. I remember tightening my seatbelt so my head would not hit the ceiling of the cockpit. I remember trying to hold the NAV charts so we could find the correct radio frequencies. I remember seeing pine trees zoom by as I looked out the window. I remember watching the ice grow thicker and thicker on the wings.

But what I remember most is my prayer. Faced with the imminent possibility of my death, I prayed “Lord, come find me. Lord, don’t forget about me.” In hindsight, that prayer surprised me. Apparently, at death, I was afraid of getting lost and being forgotten.

Over the years I’ve noticed something. He answered my prayer. I no longer worry that I will end up in some desolate corner of creation like some eternal castaway. I no longer fear being forgotten. Since that terrified, nauseous prayer somewhere over the Sangre de Cristo mountains an unforgettable voice whispered into my deepest place: “I will always find you. I will never forget you.” It is a tremendous and wonderful relief.

So today I remind myself not to let the words of Al Pacino discourage me. And I really don’t have time for a mid-life crisis. And I know that even if I never immerse myself in the Fourteen Bins that all of those film-captured faces will still be remembered and cherished forever. Thank God for that.