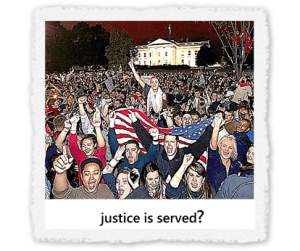 Sunday night I was, like you, fixated on my television. After almost ten years the man behind the most heinous mass murders in modern history had been found. I was beginning to wonder if it would ever happen.

Frankly, the spontaneous revelry surprised me. The White House, Ground Zero and countless other locations around the country erupted into jubilant celebration. Chanting, cheering and flag-waving went on through the night and the next day. How long has it been since our country had something to cheer about?

But why were people cheering? For many, including family and friends of those killed by bin Laden’s terrorists, they were celebrating a sense of closure. After all this time there was finally some resolution. The mastermind was dead.

For others the celebration was more visceral. Justice had been served. The victims were now vindicated. The man who had killed so many had been killed. If revenge is a dish best served cold, this was a five-star dinner. Many of those who celebrated were thrilled that justice came in the form of a bullet from a Navy Seal.

But I have questions. Was fatally shooting bin Laden the best outcome? Could he have been captured and made to face his victims and their families? Could he have gone to trial before the grieving and maimed in New York, Washington D.C., Pennsylvania, Manila, Yemen and Nairobi? Isn’t that the kind of justice our nation is based on? But that raises more questions. Could he have been captured? Would his capture have resulted in hostage-taking around the world? Admittedly, there are no easy answers.

Perhaps it is because I am a Pastor – who has done more funerals than I care to count — I cannot cheer and celebrate anyone’s death. But certainly Osama bin Laden and his fanatical minions must be neutralized. Killing non-combatants, even while hiding behind God’s name, cannot be tolerated. Just as I pray for an end to world hunger, ethnic cleansing and environmental havoc, I pray that the United States and other governments will be successful in the fight against terrorism.

So was justice served in that compound in Abbottabad? That is not for me to answer. But I am troubled by the idea of revenge. We have all seen, in places like Northern Ireland, Palestine and Central Africa, what an endless cycle of revenge can do. And we have seen it on a smaller scale: the post-divorce fighting that won’t end, office conflicts that keep escalating, those disagreements that go on and on. Revenge is a ravenous beast that is never satisfied.

I am glad so many families, survivors and other peaceful people found some closure Sunday night. And I am glad there is one less murderer loose in our world. And I am glad that God is in the judgment business instead of me.