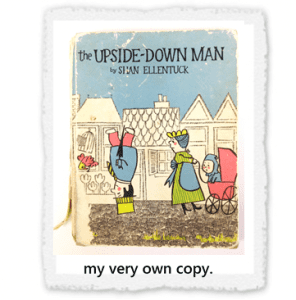 Do you ever look at the stars? Did you know that when you step out on your back porch on a crystal-clear Arkansas night many of the stars you see are not stars at all. Some of those points of light are galaxies and nebulae. And some of those stars are actually ex-stars called supernovas. A supernova is what happens when a star explodes. The energy released from a supernova is one of the most powerful forces in the universe.

When I started 7th grade I weighed 69 pounds. I know that because I was on the wrestling team and it took me an entire year to get up to the lowest weight category. We buy dog food that is heavier than that. Being small, I was an easy target for bullies. One time Larry Danner tied me up with my sister’s jump rope and hung me upside down from a tree. Larry Danner was a very powerful force in my universe.

As a kid I had a book called The Upside-down Man. Frankly, it troubled me to see that little man in his top hat struggling to navigate a right-side-up world. But now that story makes sense. As I have read the words of Christ I’ve realized that man in the top hat was onto something. The Bible says a lot of things that sound upside-down to many readers.

For example, Jesus said things like “the first shall be last” or “blessed are the meek.” The earliest Christian leaders said that the foolish will shame the wise and rejected people would become a “people of God.” While these words might sound upside-down, over the years I’ve learned that Jesus was right-side-up and the rest of the world is out-of-kilter.

There is an amazing and powerful force described in the Bible. It can empower people to do supernatural things. It can comfort someone who is hurting. It can teach and guide and lead. Most importantly, this power can transform a human life. Yours and mine.

It is an enigma unique to Scripture that the greatest power in the universe comes to us like a gentle little dove. I used to do a magic show and I owned two of the softest little cooing doves named Hocus and Pocus. It astounds me that God would offer the greatest power we can ever hope for in such a non-threatening, easy-to-shoo-away form.

Ultimately, it takes deep faith to ignore the power of money, threats and bullies and turn to much greater power that is all-to-easy to dismiss as soft and weak. But that is the mystery of the Holy Spirit. I hope you let God’s Spirit land softly on you…and then burn brighter than a supernova.