Who’s Side is He On? 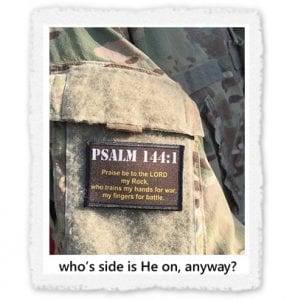 I read a story recently of a church that did not have a pastor. When a pastor was found, he raised the question about the appropriateness of displaying the American flag during their worship services. The fallout from that question resulted in a sad and angry church split. But there is an interesting side note to this story: During the months while they searched for a new pastor, the congregation simply forgot to celebrate the Lord’s Supper. No one said a word.

I love my country. There is no place I would rather live. I relish the freedoms we enjoy and I am grateful for those who gave their lives, their health and their dreams so I have the freedom to write this newspaper column, vote for whoever I prefer and, most of all, worship as I choose.

In Saudi Arabia, the Islamic government has given full police power to the CPVPV (Commission to Promote Virtue and Prevent Vice). Minority Muslims and non-Muslims are vulnerable to all kinds of religious discrimination and persecution. But the examples of this problem are not limited to other nations. In our own country there are those who would prefer a similar relationship between government and religion.

But this Independence Day as we celebration freedom of religion, we also celebrate freedom from religion. We cannot let our government get in the religion business. Throughout history this has been a disastrous affiliation. Any democracy, protectorate or monarchy — even a nation as wonderful as ours– will never match the mercy, redemption and holiness of the Kingdom of God. Our borders are not wide enough, our social programs are not gracious enough and our foreign policy is not redemptive enough. Uncle Sam is not the Holy Spirit. The Bill of Rights is not the word of God. George Washington is not Moses.

So we need to be proactive citizens. If the government intrudes on religious freedom or violates human rights we must take action. The ends do not justify the means in the Kingdom of Heaven or the United States. When John the Baptist encountered the “bad guys” at the Jordan River, he did not waterboard them. It is not a traitorous act to denounce the action of our government. It is an act of love. Neither is it “selling out” to praise our government. On this side of the crystal river everything needs restoration, including Iranian freedom of speech, North Korean foreign policy, American healthcare and my imperfect heart.

God is bigger than the U.S.A. As we sing and pray “God bless America” will you also pray “God bless China, God bless Afghanistan, and God bless Iraq”? The words of the Psalmist still ring true: “Praise be to his glorious name forever; may the whole earth be filled with his glory. Amen and Amen.” Thy Kingdom come indeed.